Meet and greet at the airport. Transfer to the hotel. Overnight at the hotel in Tbilisi. 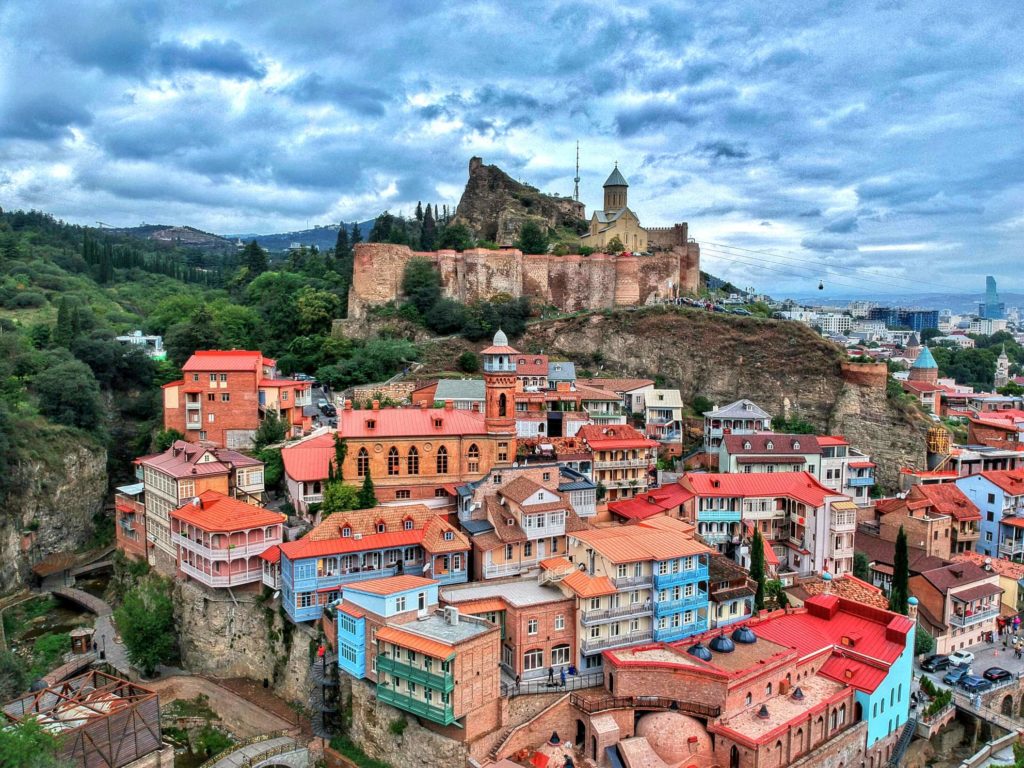 After breakfast at the hotel, we have  walking sightseeing tour in Tbilisi. During the tour we take you to the places that will show you old city. You can take a glance to the history of the city from early centuries to nowadays by walking in narrow streets of the city and exploring the religious and secular architecture. Here you find different religious buildings – churches, synagogues, mosque, as well as famous 19th century houses with wooden multi-colored balconies. You visit the sulfur bath which made an unforgettable impression on Pushkin, Lermontov, Dumas. During the tour you enjoy the superb panoramic views of the Old city. This marks the end of the Old Town. Overnight at the hotel in Tbilisi.

Our tour starts from Mtskheta, the first capital of Georgia. We will visit Svetitskhoveli Cathedral 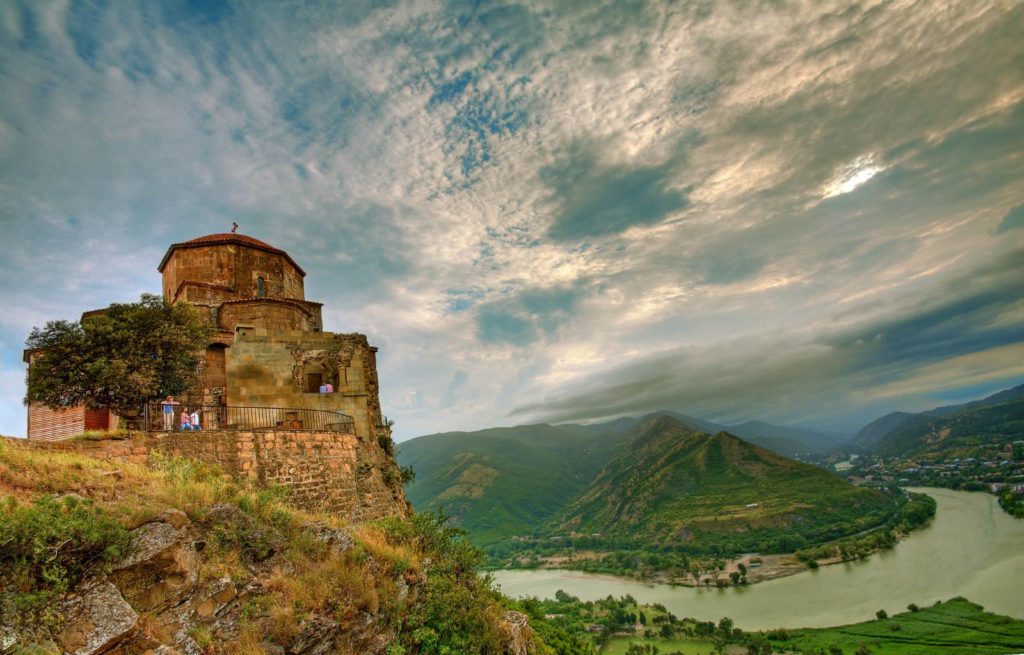 (UNESCO), the second largest church building in Georgia where the robe of Jesus Christ is buried. A masterpiece of the Early and High Middle Ages, the XI century Cathedral is the burial place of the Royal family of Bagrationi and the patriarchs of Georgia. Our next stop is Jvari Monastery which is a 6th century Georgian orthodox monastery near Mtskheta. Here the visitors are given an unrepeated opportunity to enjoy the magnificently panoramic view to the Mtkvari and the Aragvi rivers flowing together. This place is considered the cradle of Christianity and is of special importance for Georgians as the baptizing of king Mirian and Georgian people took place here in 337. And to sum up, we will visit Uplistsikhe – the most ancient cave city hewed in a rock dating back to the IV century B.C. Driving back to Tbilisi. Overnight at a hotel in Tbilisi.

We will drive to Kazbegi and from there walk up for about 1.5 hour through 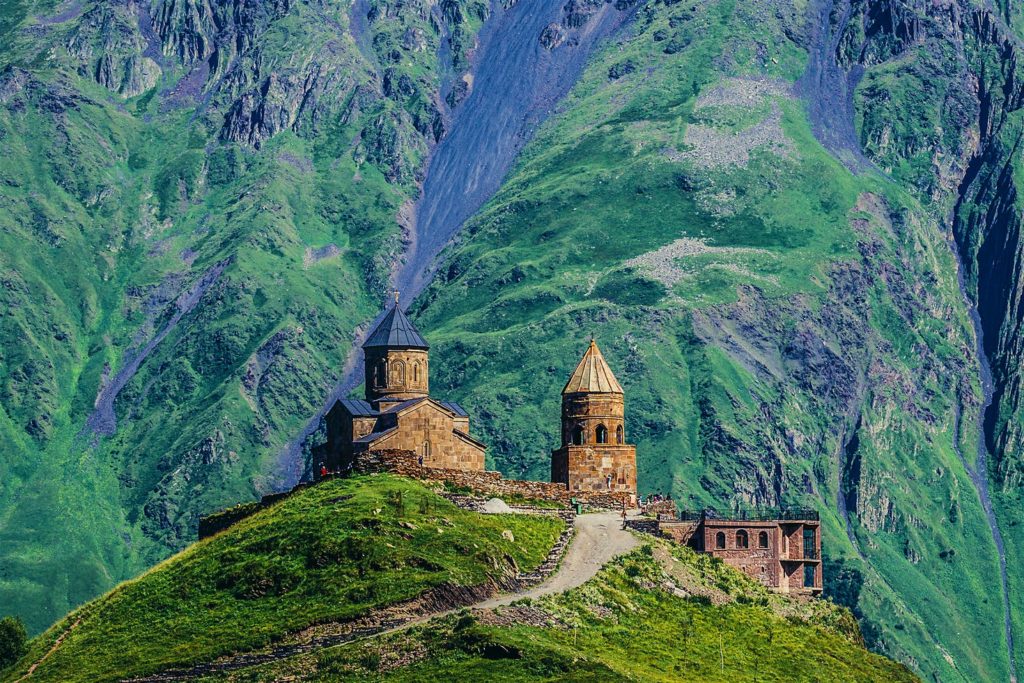 beautiful valleys and woodlands which leads us to Gergeti Trinity church (UNESCO) located at 2170m, offering beautiful views of the Caucasus Mountains and the town of Kazbegi. The church was built in the 14th century, and is the only cross-cupola church in Khevi province. Weather permitting, we may catch a glimpse of one of the highest glaciers in the Caucasus – Mt. Kazbegi (5047m), the second highest top in Georgia. Afterwards,  we drive to Dariali gorge. It is at the east base of Mount Kazbegi , south of present-day Vladikavkaz. The gorge is carved by the river Terek and is approximately 13 kilometres (8.1 mi) long.  Overnight at a hotel in Tbilisi.

After breakfast at the hotel, say goodbye to the fairy tale city of Tbilisi and drive Georgia – Armenia border Sadakhlo, fulfill border crossing formalities and start an unforgettable tour in Armenia with 10th century Haghpat Monastery (UNESCO). The monastery of Haghpat has found its place in the charming setting of the wonderful nature. It is the jewel of the Lori region, and Armenia in general. A pleasant drive accompanied with luxurious nature will take us to Dilijan to enjoy the 19th century appearance of the town. This wonderfully forested region is rich in mineral waters. Some of them are compared with Wichi in France and Davos in Switzerland. Dilijan is “the Switzerland of Armenia.” On the way to Dilijan pay a visit to Haghartsin Monastery, situated near the densely forested region of Dilijan. Overnight at the hotel in Dilijan.

After breakfast at the hotel we will have a short walk along the azure Lake Sevan. Lake Sevan has a unique 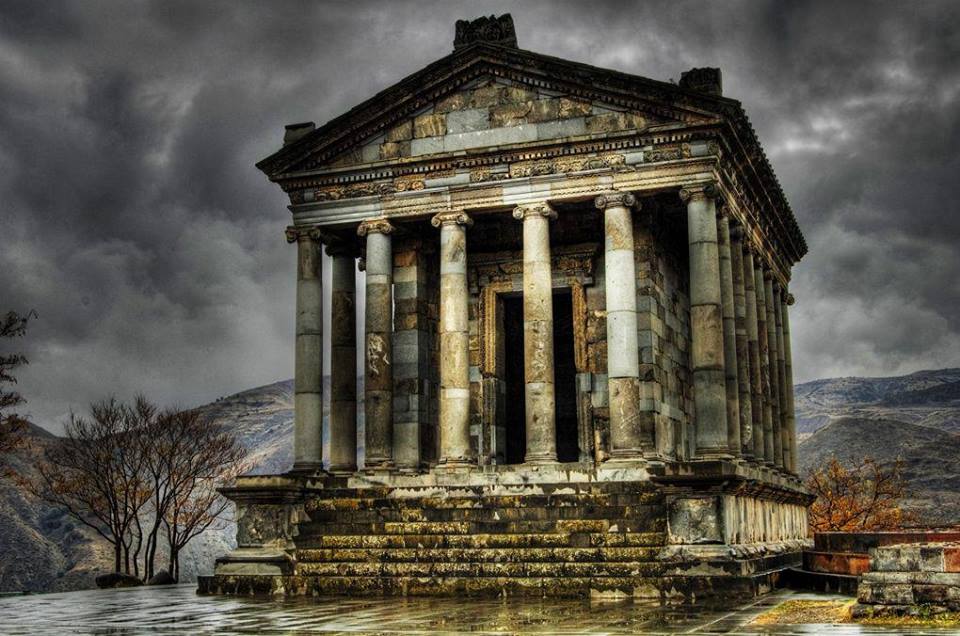 combination of great size, high mountain location, and comparatively “soft water”. Lake Sevan is one of the greatest freshwater high-mountain lakes of Eurasia. It is located at about 2000m above the sea level. (Optional* lunch tasting barbeque from Sevan trout). We will then explore the summer residence of the favorite Armenian king Ashot the Iron (Ashot Erkat) – Sevanavank Monastery (9th century). We will then explore the top tourist attractions of Armenia: Garni Temple (a pagan temple built in the 1st century, the only survival of the Hellenic epoch in the whole territory of the Caucasus) and the Monastery of Geghard (UNESCO). The monastery was first recorded in a document of 1250. Geghard is famous due to the relics, among which the most important one is the spear which had wounded Christ on the Cross presumably brought there by the Apostle Thaddeus. Here in Geghard, we can also watch the process of “lavash” baking in the traditional underground oven “tonir”, and (optional*) enjoy the medieval vocal concert. Transfer to Yerevan. Overnight at the hotel in Yerevan.

After breakfast at the hotel we start tour to the holy city Etchmiadzin. Here we visit the Mother See of Holy Etchmiadzin with its main 4th century Cathedral (UNESCO). Also, we will pay a visit to Etchmiadzin 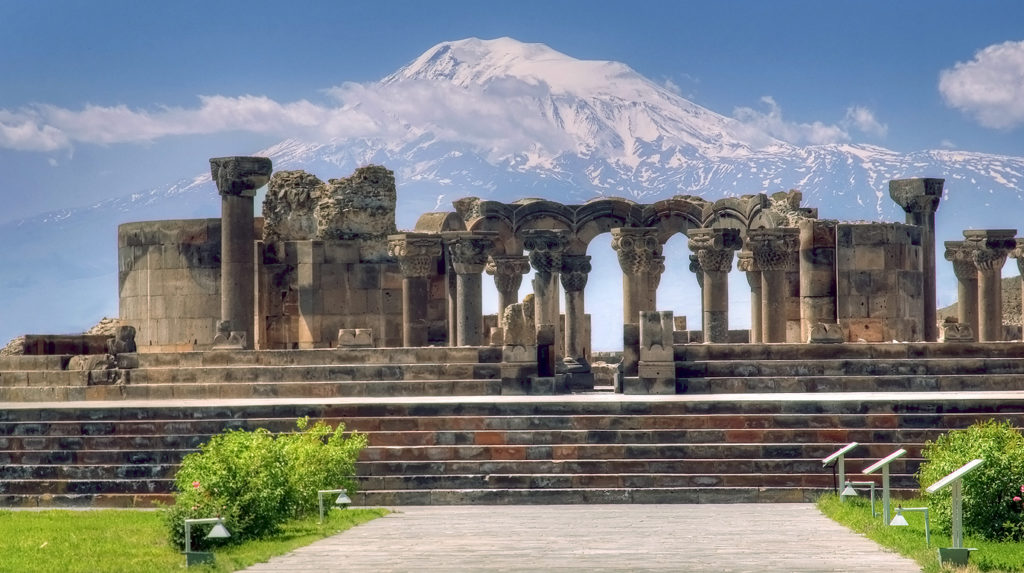 Mother Cathedral which is considered the oldest cathedral in Armenia and one of the oldest cathedrals all around the world.  Our next stop is The Treasury House of Etchmiadzin. Among the exhibits  the Holy Lance (geghard), which was used to pierce the side of Christ, the relics of Noah’s Ark in a reliquary that was created in 1698 and other valuable pieces of art and a part of the Cross on which Jesus was crucified, stand out. Our next stop is Zvartnots Temple (UNESCO) or Church of the Guardian Angel (7th century). Although survived only in ruins, the church boasts a wealth of cultural and historical attractions to inspire the visitors. Driving back to Yerevan. To sum up the tour, we visit Megerian Carpet Factory offering hundreds of antique and new handmade carpets.  Take your “the most Armenian” glances taking part in a professional photo shooting in Armenian traditional and vintage costumes. Overnight at the hotel in Yerevan.

After breakfast at the hotel, we will start one of the most picturesque tours to the Southern part of Armenia. Drive to Ararat valley which offers the closest and the best view to Biblical Mount Ararat. We pay a visit to 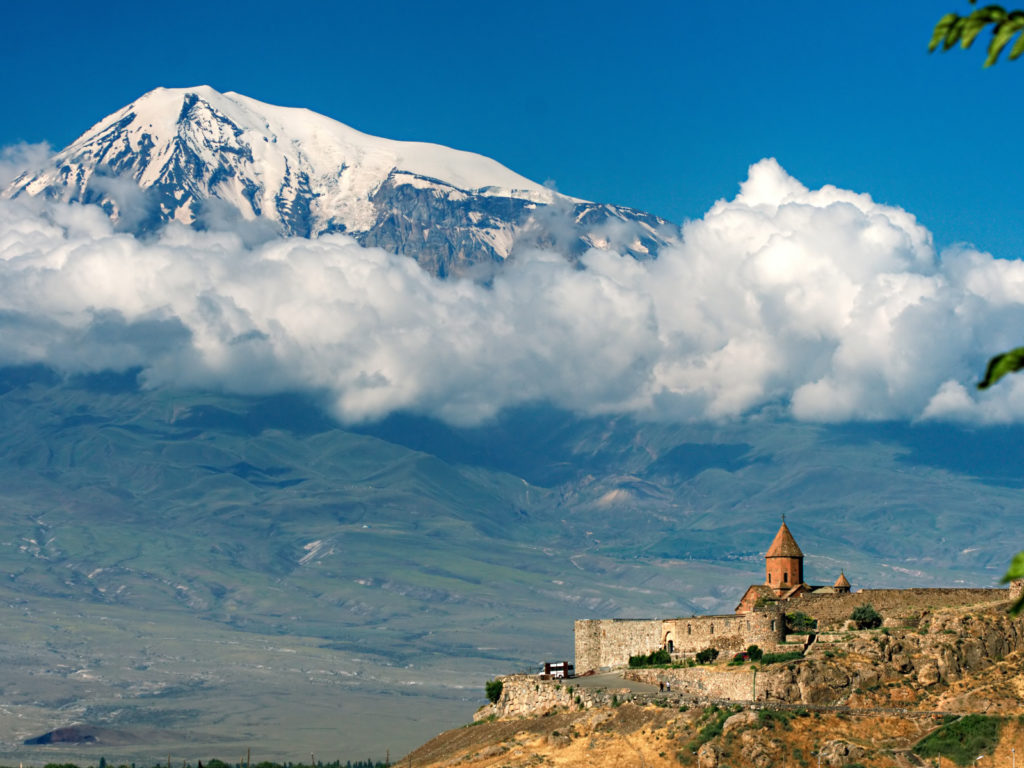 the Monastery of Khor Virap. This place is fairly considered one of the cradles of Christianity in Armenia.  Here we can descend the deep dungeon where the first Armenian Catholicos Gregory the Illuminator was jailed for long 13 years for disseminating Christianity in Armenia. Drive to Areni village, where we taste local wine made of indigenous grapes. Our next stop is Areni Birds’ Cave – one of the rarest and best-preserved late Copper Age monuments in South Caucasus, which comes to prove that wine production in Armenia has at least 6000-year history. Afterwards, we visit red color Noravank Monastery (13th century). The narrow road leading to the monastery is surrounded by beautiful red rocks on both sides. Our last stop is the picturesque Shaki Waterfall.  Formed on the Shaki River the waterfall flows into a deep gorge from a height of 18 meters. In spite of the small height, Shaki waterfall has a large capacity, and the tumbling of water is heard from afar. Overnight at a hotel in Goris.

After breakfast at the hotel, we will drive to Armenian – Iranian border. Once in Iran we start our amazing tour to Tabriz. Transfer to the hotel in Tabriz and free time for having rest. Overnight  at a hotel in Tabriz.

After breakfast at the hotel we start our tour visiting local historical market Tabriz Bazaar (UNESCO).  It is 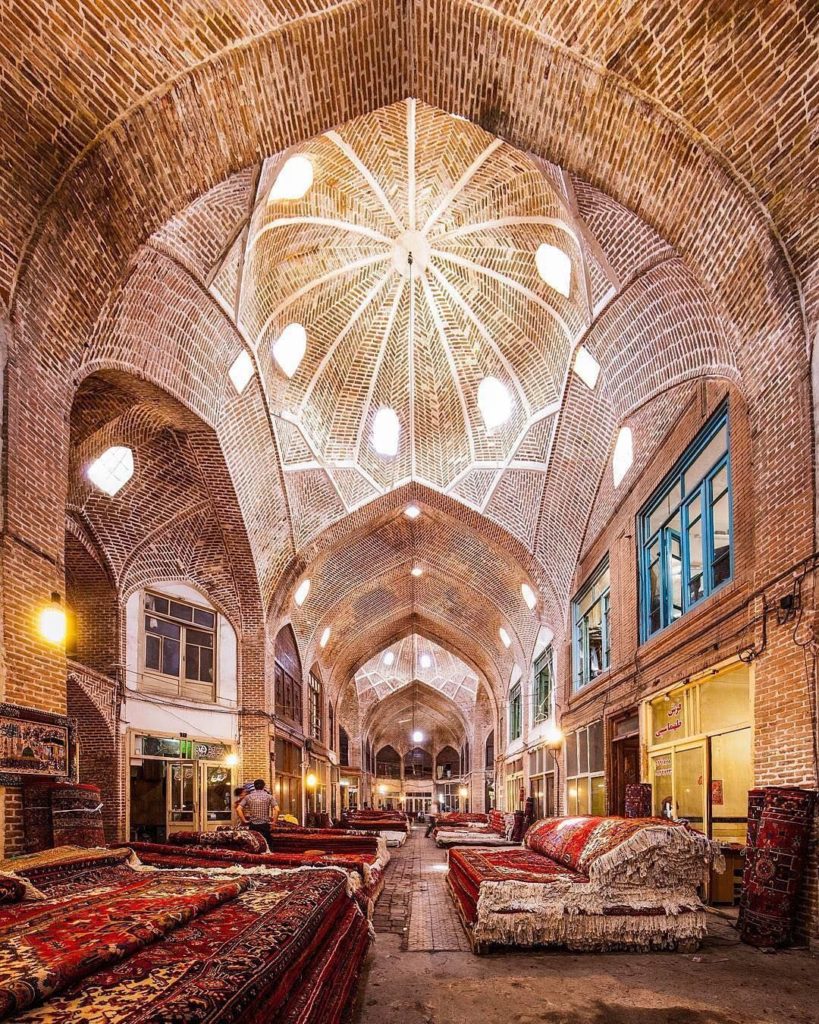 one of the oldest bazaars in the MIddle East and the largest covered bazaar in the world. Tabriz Historic Bazaar Complex consists of a series of interconnected, covered, brick structures, buildings, and enclosed spaces for different functions. Our next stop is the gorgeous historic park  El Gölü (Shah Gölü). This garden consists of an artificial lake and a mansion which are surrounded by trees. The importance of this garden is its artificial lake with a length of 200 meters on each side. A stroll around the lake in the evening cool weather followed by а cup  of tea in the open-air cafe isa must- do joy for every visitor. Overnight at a hotel in Tabriz.

After breakfast at the hotel we drive to ancient town Ardabil, which is famous for its silk and carpet trade traditions.  Ardabil rugs are renowned and the ancient Ardabil Carpets are considered among the best of classical Persian carpets. The town also boasts architectural miracle  Sheikh Safi al-din Khānegāh and Shrine Ensemble (UNESCO). Built between the beginning of the 16th century and the end of the 18th century, this place of spiritual retreat in the Sufi tradition uses Iranian traditional architectural forms to maximize use of available space to accommodate a variety of functions. Drive to Anzali. Here we visit Anzali Lagoon. The boat excursion will be a pleasant experience and you will see beautiful sea birds and see fishermen near the port. Overnight in Anzali.

After breakfast at the hotel we head to Masouleh. The city boasts unique architecture and beautiful nature. We visit Masouleh-Rood-Khan which is the river passing through the city, with a waterfall located just 200 meters away from the village. Many other springs are found around Masouleh, which is surrounded by beautiful forest from the valley to the mount. Fog is the predominant weather feature of this place. After the traditional lunch at Masouleh we will move to Qazvin in the. During your free time you can enjoy all the beauty of Qazvin. Overnight at a hotel in Qazvin.

After breakfast at the hotel we drive to Alamut region,  where we visit a mountain fortress – Alamut castle. After the excursion, the tour continues to Tehran – the capital of Iran and the largest city of the country. This grand bustling metropolis of 14 million people will impress you with its unique atmosphere and lots of attractions. Here you will visit the Saadabad castle – a palace built during the Pahlavi era (it contains 18 castles or houses). In the afternoon, you will be able to have a tour to Darband with its beautiful nature or go to the grand bazaar of Tehran – an old historical market of Tehran. Overnight at a hotel in Tehran.