Arrive in Tbilisi, meet in the airport and transfer to a hotel. Overnight at the hotel in Tbilisi. 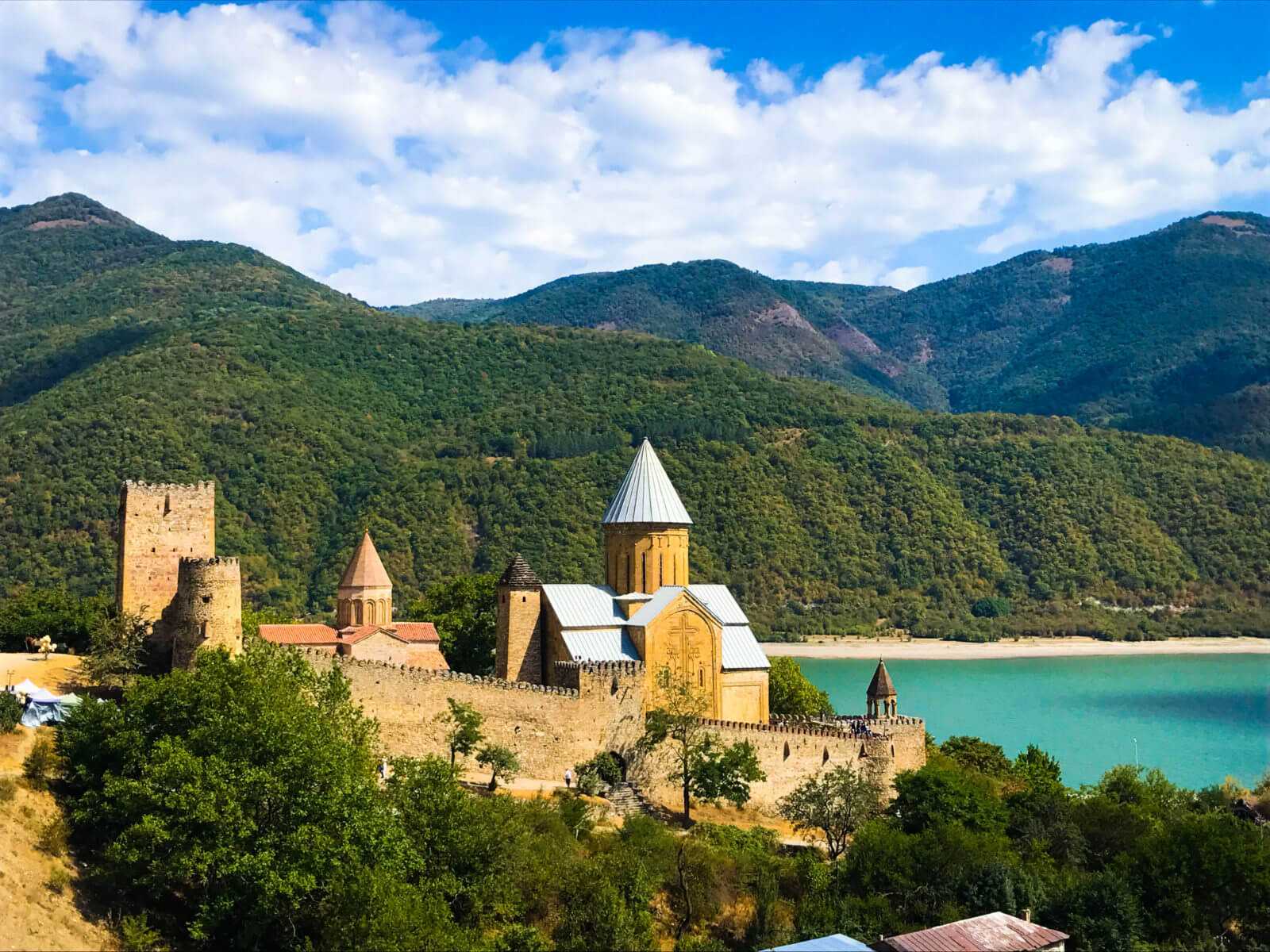 After breakfast at the hotel we drive to Ananuri fortress, which is a XVI century castle complex on the Aragvi River. The Ananuri fortress stands beside the famous Georgian Military Highway overlooking a large Jinvali lake. Then we will visit Russian friendship monument. The government of Soviet Union built this monument in order to celebrate 200 years since the treaty of Georgievsk signed in 1783. Then we will drive to Kazbegi and from there walk up for about through beautiful valleys and woodland which leads us to Gergeti Trinity Church located at 2170 m, offering beautiful views of the Caucasus Mountains and the town of Kazbegi. Weather permitting, we may catch a glimpse of one of the highest glaciers in the Caucasus – Mt Kazbegi (5047m). Afterwards drive to Dariali gorge. Dinner and masterclass. Overnight at the hotel in Kazbegi.

After breakfast at the hotel we will drive to Gori where Joseph Stalin’s museum is situated. It contains 60,000 exhibits. The museum includes the memorial house where Stalin is believed to have been born, an

exhibition building, and Stalin’s personal train car, in which he traveled to Tehran, Yalta and Potsdam. The museum also houses Stalin’s personal belongings. After that proceed to Borjomi. The town is famous for its mineral water industry (which is the number one export of Georgia), the Romanov summer palace in Likani, and the World Wide Fund for Nature-site Borjomi-Kharagauli National Park. Borjomi mineral water is particularly well known in those countries which were part of the former Soviet Union; the bottling of mineral water is a major source of income for the area. Because of the supposed curative powers of the area’s mineral springs, it is a frequent destination for people with health problems. Borjomi is also home to the most extensive ecologically-themed amusement park in the Caucasus. Proceed to Tbilisi. Overnight at the hotel in Tbilisi.

After breakfast at the hotel we will drive to the ancient capital of Georgia – Mtskheta and visit its historical places: Jvari Monastery (6th century) and Svetitskhoveli Cathedral (11th century) – both UNESCO World Heritage sites. Drive back to Tbilisi and visit Georgia Mother Statue. Overnight at the hotel in Tbilisi.

After breakfast at the hotel we will go to Sighnaghi, the city of love, where we can explore the very beautiful renovated town with its cultural and historical traditions and enjoy the amazing views of Caucasus Mountains and the Alazani Valley. Our next stop is Bodbe where we will see the Bodbe Monastery. This monastery is an important holy place as it is where Saint Nino, who brought Christianity to Georgia in the 4th century, is buried. Proceed to Sheki, a village in Azerbaijan. Visit Sheki Khan Palace. It was built in 1762 by Huseyn khan and sits shaded by huge chinar trees within the khan’s fortress at the top of this charming Silk Road city. Overnight at the hotel in Sheki.

After breakfast at the hotel proceed to Baku. We will be introduced to the history of Baku, facts and legends of the ancient city. Our first stop will be Icharishahar, the Old Town of Baku city. We will visit the 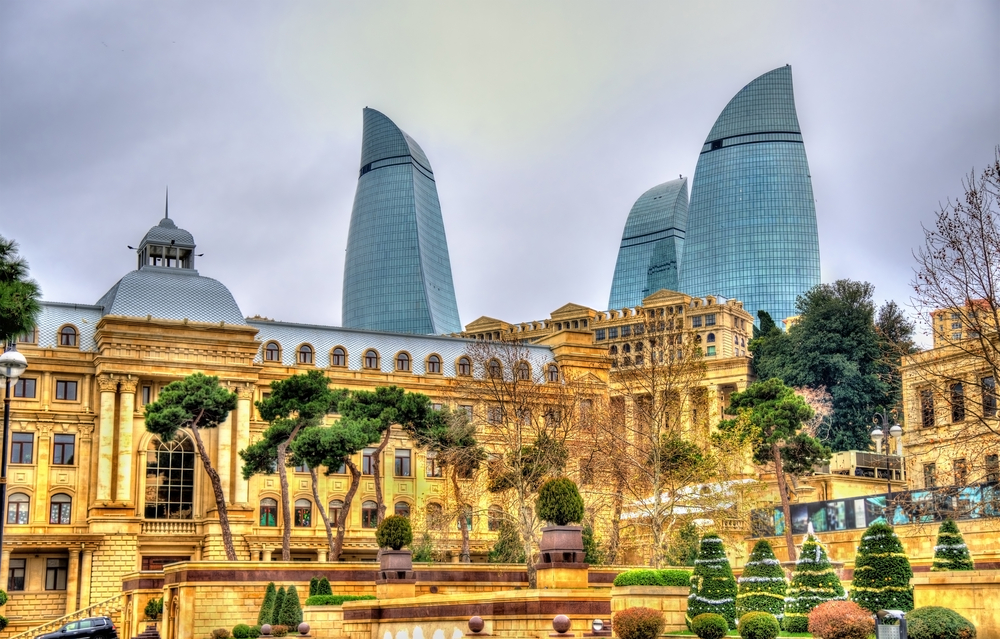 Shirvanshahs’ Palace, the central part of ancient Shiranshahs kingdom. We will get to know the history of the palace and visit the mausoleums that witnessed many troubles for the past two centuries. Then we will visit the most remarkable and mysterious monument – the Maiden Tower, built in the south-east part of the Old Town. Once we immerse ourselves into the experience of discovering such extraordinary building, we will know why it is considered as the symbol of Baku. Our next stop is Bibi-Heybat Mosque. During the 13th century Shirvanshah Farrukhzad II Ibn Ahsitan II built a beautiful mosque in the city now known as Baku. Alexandre Dumas paid a visit to the mosque in the 1840s and gave it the nickname “the mosque of Fatima.” After it was completely destroyed by the Bolsheviks in 1936, the mosque was rebuilt in 1994 on the same site and is today the spiritual center for Muslims in Azerbaijan. Ukeyma Khanum, a descendant of the Prophet Muhammad, is entombed within the mosque, adding to its religious significance. Overnight a t a hotel in Baku.

After breakfast at the hotel we will drive to Gobustan region situated in the west-south of Baku. The meaning of the word “Gobustan” is derived from two words “gobu” – “ravine” and “stan”- “place”, i.e. ravine 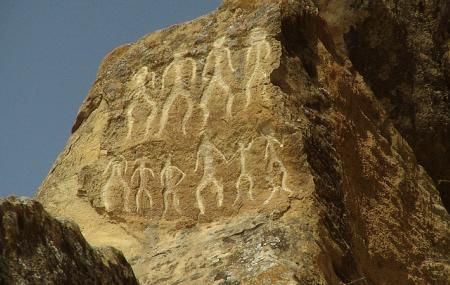 area. The word “gobu” is also of Turkic origin and means “a dried up river valley”. We will start the tour from Gobustan Museum where we will see ancient human bones, work tools used in back to thousand years ago during the Mesolithic period. Then, we will advance to the mountain in order to see real rock paintings in the open air museum. Later on the tour we will continue to the Mud Volcano which is not far from Gobustan National Museum. Proceed to Baku. Departure.